How Mr. Buzzaround Came to Bee 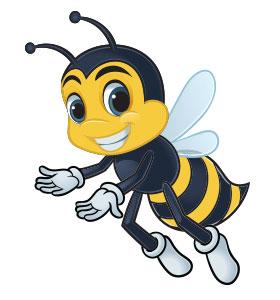 During one of the coldest winters on record up north, the Queen Bee at Honeyhaven Hive, in order to conserve enough honey for the worker bees to eat until spring, ordered all of the male bees to leave the hive (this actually happens in honey bee colonies during the winter) and face the bitter cold. One of the bees who was asked to leave was a spunky one named Mr. Buzzaround. Known for his curiosity, Mr. Buzzaround got his name because he was always flitting around the hive, dropping in on the other bees and making friends whenever and wherever he could. Although he knew he would miss all of his friends at the hive, Mr. Buzzaround immediately made up his mind to fly south to find a warmer place to live.

Along the way, Mr. Buzzaround found himself flying along the longest river in the United States, the Missouri River, using it as a guide to follow on his journey. After several days of traveling, Mr. Buzzaround spotted a place along the river filled with garden areas that he knew would be filled with hundreds of flowers in the spring. As he flew in for a closer look, Mr. Buzzaround couldn’t help but notice the grand three-story brick mansion rising tall above the garden areas.

There were so many chimneys on the roof of the mansion, Mr. Buzzaround decided to land on the edge of one and rest his wings for a while. His curiosity, along with the warmth that was rising from the chimney, got the best of him, and he carefully crawled inside. As he made his way down, Mr. Buzzaround saw a large opening, which turned out to be a fireplace. As he peered through the opening, he was amazed at the beauty of the room, with its lovely furnishings and elegant decorations.

While he was taking it all in, a group of people walked through the room, led by a tour guide. Forgetting that he could be seen, Mr. Buzzaround was startled when a youngster on the tour pointed to him and said, “Look, there’s a honey bee in the fireplace!” Mr. Buzzaround’s first instinct was to fly back up the chimney and out into the cold, but he stopped in his tracks when he heard the tour guide ask the group, “Did you know that the honey bee is the official insect of our state?” After the group moved to another room, Mr. Buzzaround decided that he’d stick around and learn more about this state that had honored him with such a unique title.

As he quietly explored each room, Mr. Buzzaround discovered that he was in the Governor’s Mansion in the State of Missouri. Knowing that he had found the perfect place to call home, Mr. Buzzaround settled into the mansion, where he has lived ever since. During the spring and summer, he spends his time flying from flower to flower in the gardens, and during the fall and winter, Mr. Buzzaround enjoys the warmth of the mansion and those who live and work there. He also dreams of someday being a tour guide, taking visitors from room to room while explaining the unique history of each room.

Explore the Mansion with Mr. Buzzaround

Learn about the Governor's Mansion